Here you can discuss details about instruments, equipment and all those other bits that non-musicians won't understand !

Ouch. For the first time in 42 years I've done some serious damage to a guitar - my unique Alvin Davies resonator: 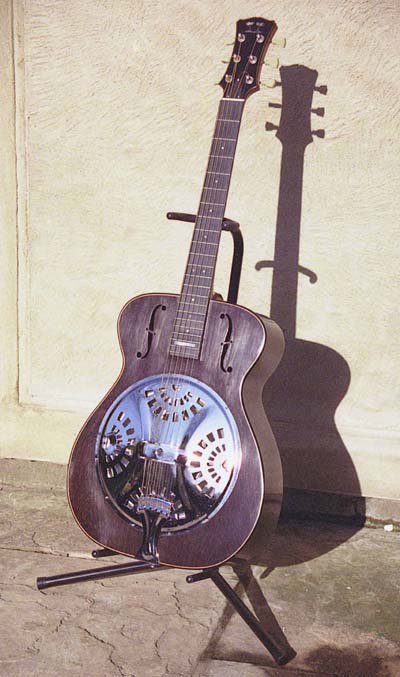 I was doing some recording with it last Tuesday, stooped to switch on the recorder, and the strap became detached. It only fell a couple of feet, but the edge of the desk must have just caught it at the corner of the headstock, and left it with a 3/4 break at the weakest part of the neck below the stock.

The good news is that Manson's repair shop is only 20 miles away, and they've just phoned to say it's already fixed, and at a pretty reasonable cost, too. They say it would only be invisible if they sunburst the neck, but I think I'd rather keep the finsih and the battle scARs. Maybe I'll post some before and after pics when I've collected it, if anyone's interested.

They've even thrown in a set of new strings - though that spoiled my plan to record with old ones before putting new sparkly ones on for the next gig. Can't have everything, I suppose!
Nothing can possibly go wrong...
Top
Post Reply
1 post • Page 1 of 1

Users browsing this forum: No registered users and 8 guests