Gordon Giltrap and Friends at The Symphony Hall 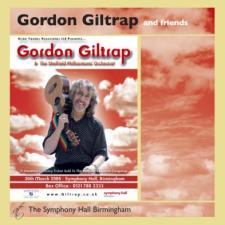 DVD Side- The Symphony Hall Show
CD Side - Double Vision, The Eye of the Wind - Gordon Giltrap and The Sheffield Philharmonic Orchestra

Watch a short sample from this DVD here courtesy of YouTube.

Andrew Bernardi
Violinist on The Brotherhood Suite, plays Gordon's Pedrazzini Violin with a Yehudi Menhuin bow. He is a busy working musician leading several of his own ensembles. Andrew is currently Professor of violin at Trinity College.

Raymond Burley
One of the country's premier classical guitarists who has worked for many famous names over the years, most notably Dame Peggy Ashcroft. Raymond has had many compositions written for him including one by the late Dudley Moore. Ray and Gordon work together as the duo Double Vision.

Gilly Darbey
Who has for many years been a highly respected vocalist on the concert circuit, having worked alongside Keith Donnelly in their duo Nothing by Chance and latterly as a solo artist. Gilly has recently made her home in New Zealand.

Andy Riess
Who has been a regular on the West End stage for many years performing in shows like Les Miserables. He has his own touring company called Beyond the Barricades.

Rick Wakeman
The one and only, composer and master keyboard player from Yes / Strawbs.

and thanks to too many more to mention !
Tweet