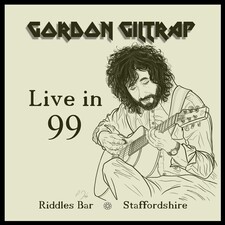 I'm delighted to share with you the news that I have a new live album released this month (Jan 21) by download from MIRROR NOIR records www.mirrornoir.com.

They have in the past released my Work of Angels charity release along with ‘You make me believe’ the hospital’s choir Christmas release.

The story behind the release is an interesting one in as much as it’s a recording that has been in my possession for many years and I just ignored it thinking that it wouldn't be worthy of release and also because some live albums can be a bit dodgy in terms of recorded quality and content, but on listening to it I couldn't believe how good the quality was.

Recorded straight to mini disk directly from the desk by my dear old friend Malc Welch on the night of this gig at Riddles Bar Stoke on Trent in front of a small but appreciative audience it is a bit of a gem. The album is not a re-release and is a truly warts and all performance with very little editing apart from the in-between chat that can be a bit tedious after several plays. I had been looking towards giving a complete GG album to my friends Paul White and Mark Soden from Mirror Noir for some time now. I had made the odd guest appearance on their ambient recordings in the past but since unearthing this live offering I thought this a worthy contribution to their rapidly expanding online catalogue.

Reading through the track listing is fascinating because many of the pieces I no longer perform for reasons of wanting to move on to newer material and because quite honestly some of the material is technically beyond me now! I'm sure many of you will remember old pieces like ‘At Giltrap's Bar’ and ‘Splinter’ alongside the ‘Overture to Heathcliff’ and ‘Shady Tales’ which I was performing at the time back in 99.

A special thanks must go to Malc Welch for keeping the faith and being there and recording the whole thing. Thanks also to Chloe Doyle for her superb line drawing of me taken from a photograph from the period where I have a mass of dark hair and matching beard, playing that small bodied Rob Armstrong that I used for many years that has gone to a good home I'm sure after I parted with it yonks ago. Finally to Paul and Mark for editing and final mastering.

Here is a bit of info for your interest on artist Chloe Doyle.

Chloe is a Derby born artist who has been drawing and painting since childhood. Chloe attended the Round House College acquiring three art diplomas and an award in drawing from the London College of Art and later a brief spell at De Montford University, but decided to leave early to pursue her own artistic journey. This line drawing is only the tip of the iceberg in terms of her creative talents.