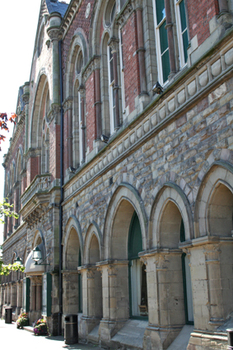 2007 saw the 25th anniversary of the Borough Hall being reopened as Stafford Gatehouse Theatre, by his Royal Highness the Duke of Gloucester. The Borough Hall was originally opened on 20 June 1877 and the building once housed Stafford Borough Council.

In the building's early days, the Borough Council offices, the library and the Wragge Museum occupied the ground floor and on the first floor was a large Assembly Hall with a stage, which was used for meetings, dances, concerts and plays. Building work began to convert the venue into a theatre when the Borough Offices were re-housed in the Civic Centre, and so the Gatehouse was born in 1982.

Since opening, the venue has experienced great success, both with touring professional shows and amateur productions. As a theatre venue, the old Borough Hall was an active supporter and promoter of amateur dramatics and most of the successful theatre groups like Stafford Players and the Operatic Society were formed in this environment. These partnerships have continued to thrive and the Gatehouse prides itself on achieving the perfect balance between meeting the needs of the companies and societies which use the building and the ever present need to both increase its financial viability whilst ensuring it continues to offer high quality productions to Stafford borough residents.


More information will be added when available