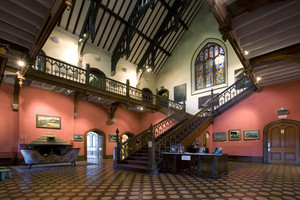 This dower house was built in 1856/57 for Lady Elizabeth Love Jones Parry of the Madryn Estate. The structure is a superb Victorian Gothic mansion and listed Grade II* by CADW. Plas Glyn-y-Weddw has long been associated with art as it was purpose built to house the widow’s own art collection. With its magnificent Jacobean staircase, hammer beam roof and 10 airy gallery spaces, it rightly bears the name Gallery in the Vale of the Widow. Indeed Lady Love Jones Parry’s ghost is occasionally seen walking the upper landings.

After the death of Lady Elizabeth in 1883, her son Sir Duncombe Love Jones Parry, a lively Baronet and MP for Caernarfon, who assisted in the founding of the Welsh colony in Patagonia, let the mansion to the Angerstein family. They were notable bankers and art collectors of Russian provenance; indeed the elder Mr. Angerstein was said to be a child of the Czarina Anna. Today the only clue to the Angersteins’ involvement with Glyn-y-Weddw is the gravestones of their pet dogs buried in the Plas’ garden.

In 1896 the mansion was sold to the Andrews family of Cardiff. They were entrepreneurs who developed the West End of Pwllheli, established a horse drawn tramway between the Gallery and Pwllheli and opened the mansion to the public. The mansion offered art, music, dancing and other entertainment for visitors and local people.

The mansion survived two world wars and was acquired by a Welsh artist Gwyneth ap Tomos and her husband Dafydd in 1979. They lovingly restored the gallery in the 80s and early 90s and founded a body of Friends of the Gallery who now number over 1200. In 1996 the Gallery was acquired by a trust formed by the Friends, with Lottery, ERDF and other funding and in the following years major restoration of the Gallery took place.

Today the Gallery is a thriving Arts Centre, with its own picture and print collection and an important display of Swansea and Nantgarw porcelain on loan from the Andrews family, descendants of Solomon Andrews who first opened the Gallery to the public.

It also houses two celebrated sepulchral monuments of local Welsh saints from the 6th Century and an exhibition of the mansion’s history.