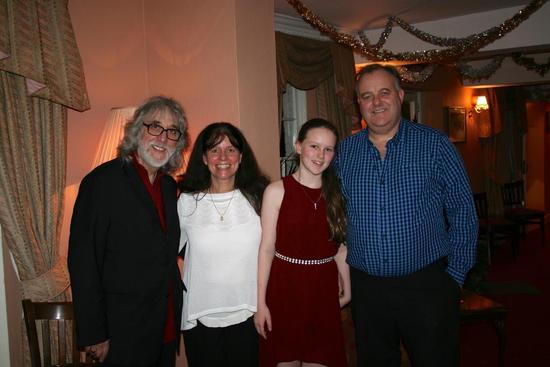 David's take on his day:-

The 21st December 2013 was my 60th Birthday - I had planned a day fishing with friends equally daft enough to sit round a lake at this time of year trying to catch carp.  My 12 year old daughter Isabella (dob 6th April) had gamely volunteered to come with me (for those of you "in the know" you'll guess where this is leading).  I won't go into the details but the fishing was curtailed by the determination of others that there be a "surprise" birthday lunch at Corse Lawn Hotel just outside Tewkesbury for 20 or so friends and family. 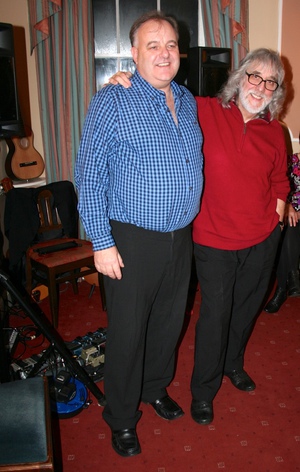 Apart from the fishing, I have been trying to play classical guitar for more years than I can remember and have been a fan of the Acoustic Guitar and, of course, Gordon Giltrap, ever since being dragged along to Birmingham to see Cliff Richard in Heathcliff (redeemed only by the well known part of the Troubadour, somehow lost from the final draft of that Bronte classic!) I'd met up with Gordon and Hilary when my practice sponsored a performance at the Roses Theatre in Tewkesbury several years ago.

My "surprise" was complete when Gordon and Hilary appeared!  Lunch over, we sat back and enjoyed almost two hours of a personal Giltrap performance.  I knew most of the playlist - I've got all of the CDs and have been to numerous concerts - I have the Burley/ Giltrap "Giltrap for Classical Guitar" but in such an intimate atmosphere there was something extra special and unforgettable.  It is difficult to describe, but there is definitely another side to GG which enhanced the day, over and above the expected level of concert performance.

If you ever get the chance and you want to entertain and impress, having Gordon play for you is just about as good as it gets.  And what price can you put on the unforgettable?

I was as surprised as my Dad when I found out that Gordon Giltrap had arrived at Corse Lawn to play for us all.  Mum had kept it a secret and both Dad and I were speechless (a rare moment).  The afternoon was so enjoyable as Gordon played his classics as well as some pieces that I had not heard before.  He played with a range of different guitars and used a number of different special effects that were significant to each piece.  Everyone really enjoyed the music and chat; I know that he has at least 20 new fans now and I would definitely recommend him for any special event. 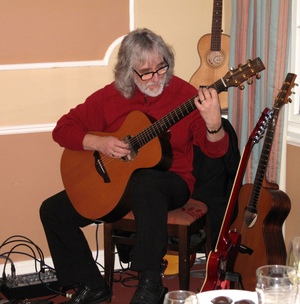 What a fabulous day - couldn't have gone better.  I must say that I did tell David about the lunch the day before as he was definitely not going to play ball and took a huge amount of coaxing primarily from our daughter!  What I didn't tell him in advance was the fact that Gordon would be turning up and, when he saw him first, there was an element of double take and he said "I don't know what to say" which is remarkable as he is not normally speechless!

The venue is beautiful and the staff very helpful without being intrusive so our lunch was first class and Gordon's performance was the icing on the cake.  He completely captivated the audience which is a tall order given the age range from 4 to 85 years of age and I believe that he now has at least 22 new fans, the other three of us were already there!

Everyone commented on what a really nice and genuine person Gordon is and Hilary is also really friendly and was happy to chat to our guests.   It was a real revelation to those who hadn't been fortunate to hear him previously,  that someone with such talent can also be so modest and natural as he chats between pieces.  Gordon's website has been much in demand today and news has spread like wildfire amongst the friends and family of all attendees.
Tweet