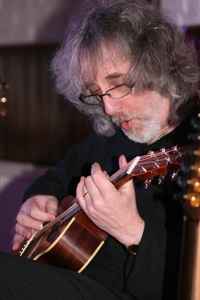 The tiny village of Fringford in Oxfordshire played host to the Troubadour's latest concert under the 'Live and Local' banner.

Although the village hall only housed an audience of about eighty five souls, it was packed - tables for the interval's supper being laid out 'cabaret' style. This meant that our hero could not possibly escape as there were no exits at his end of the room.

The murmuring of the audience was subdued within seconds of Gordon beginning to play and they were captivated as they always are by his wonderful music and entertaining repartee. I always seem to lose myself in the music and was surprised when Dodo's Dream - the first act finale came up. This piece demonstrated it's WOW factor to good effect and I overheard many appreciative and complimentary comments in the interval.

Said interval was a little longer than usual to allow supper to be served. On offer was a choice of pasta, cottage pie or sausage and mash - all delicious (well my sausages were) and served hot. Hearty congratulations to the local ladies who catered for us.

After Gordon had drawn the raffle, the second set was interrupted briefly by a small fire breaking out on one of the tables - illumination by candles - but this was swiftly dealt with and we were soon being drawn in to the music once more.

During part two we were treated to a delightful new piece entitled Rachel's Reflections and heard the developing Roseberry Topping - first class stuff. Gordon's finale - Heartsong would have brought the proceedings to a resounding end; but our hero was trapped with no escape route, and he was not so reluctantly compelled to encore with the energetic Lucifer's Cage. Unsurprisingly those gathered showed their enthusiastic appreciation.

I really like these small village hall events. They allow an audience that may not be familiar with Gordon Giltrap and his music an intimate introduction to his work and I feel sure enlarge his family of fans. Long may they - and he - continue.

Photos from the evening can be found here