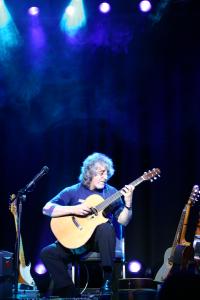 These reviews of this concert were originally posted on Gordon's discussion forum.

By Denis and Valerie Teulon.

Both Val and I enjoy Gordon's Music and we have ventured to many new venues and parts of the UK to see him.

The Village of Smarden, is situated a few miles from the busy town of Asford Kent. However those few miles hide a "Chocolate Box" English Village, complete with thatched roofs and Oast Houses.

The Community has worked hard to bring about the construction of a New Village Hall and an extremely nice small Music and Drama Venue.

Gordon has previously played at concerts aimed at raising funds for the new hall.

When we arrived the new hall was well appointed and equipped. A lighting engineer had set up numerous varilights on and around the stage.

This combined with lots of stage smoke, gave the impression of a Pink Floyd Concert in full swing.

The Villagers and Visitors like ourselves, then sat back to an evening of Gordon's hand crafted music and anecdotes.

He played a wide repetoire including Rainbow Kites right the way through to the Dodo's Dream Workshop. This was received so well that an encore was required.

It was encouraging to see a number of children in the audience, who may well become the musicians of the future.

The Combination of the English Countryside, the new Venue and Gordon's unique music, made for a memorable evening for all who attended.

I was lucky enough to be at this gig on Saturday and would like to thank Gordon for a memorable evening. Special thanks for repeating "The Dodo's Dream" in the second half - with explanation as to the mechanics of it. It was nice chatting at "half-time" and thanks for signing the DVD, which is brilliant.


This from John C

I was priviledged to be at your concert with Jim W and our repective wives on Saturday at Smarden - we had travelled from Essex some 60 miles to see you and were not disappointed! You may remember we spoke briefly about Levin guitars.

Thank you for playing our requests, especially A Christmas Carol - I am attempting to learn this as my wife (andI) love the tune but I will not play it out at our local clubs until I can do it justice (may be sometime!). Like you, I am self taught and have been playing some 50 years but have never come close to your level of playing which never ceases to amaze me.

Lovely concert at Smarden, thanks again.

Thanks to all concerned for taking the time to write in.