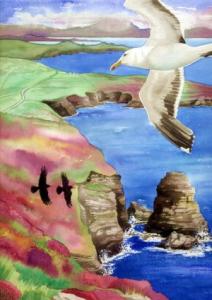 This great review was posted by Jane Tomlinson on her website, thanks Jane !

After the grief of the past days and weeks, I needed a significant dose of musical balm to soothe my soul.

Last night Gordon Giltrap provided exactly what I needed at The Stables in Milton Keynes.

Gordon is a virtuoso guitarist and composer who made his name in the 1960s London folk scene.

If you're thinking "who?" and think you have never heard anything by him, think again. Gordon's most well-known composition, 'Heartsong' was used as signature tune for the BBC's Holiday programme for many, many years. If you are aged 35 or older, you'll know it!

Gordon himself describes his music as 'lots of strumming with widdly bits' and while that may be accurate if modest, it fails to take into account the fusion of folk, rock, pop, blues and classical that Gordon's music combines. And the breathtaking beauty.

I first came across Gordon Giltrap's work in 1976 as a 13-year-old, when my brother came home with the Gordon's album 'Visionary'; a collection of big, sweet, melodic instrumental tunes of acoustic guitar with orchestrated rock backing, which crept through the bedroom wall and burned holes deep into my brain. I rediscovered this album last August and excitedly remembered every chiming, clear note.

I played it repeatedly to catch up with not hearing it for nearly 30 years. I played it so much in fact, that even my tolerant husband Moth was beginning to get a bit fed up with it!

Gordon has well-known guitarry friends, many of who describe him as a major influence on them. But Gordon's biggest early influence was Bert Weedon, whose tutorial guidebook 'Play in a Day', inspired so many guitarists. And last night 87-year-old Bert was in the audience, looking dapper and charming, sitting on the front row with his wife. Also on the front row was Jim Marshall, 'The Father of Loud', who created Marshall amplifiers.

At half time, I briefly spoke to Gordon at the merchandise desk. I asked him if he'd please play his composition 'Lucifer's cage' for me in the second half, and I told him about my painting 'From the four winds' (pictured above) which is named after one of Gordon's songs. I'm glad he didn't play 'From the Four Winds' because it is so highly emotionally charged for me at the moment, I would have been unable to stop myself from crying.

Instead, to my delight, he not only played 'Lucifer's cage' as an encore with all the power and passion I had hoped for - and needed - he also told the audience about my painting.

Thanks Gordon, and thanks for the wonderful, wonderful music. I just hope you think my composition does your composition justice!