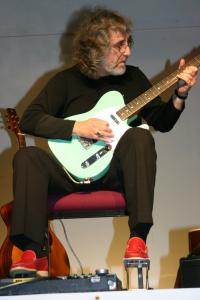 The following review is taken from the website of The Real-Music Club, Sharpe's Pottery Museum, Derbyshire.


It was a hot night. The bricks in the kiln at Sharpe's Pottery Museum had absorbed the warmth of the day and added to the shimmering nature of the evening. Everyone was in their summer gear, floaty dresses, linen shirts and trousers, bright colours, silks, a touch of the exotic, even the odd pair of shorts and sandals. Gordon Giltrap, though, was dressed all in black other than for a striking pair of soft, red leather moccasins — his one concession to the colour of the evening. With his beard and long dark hair he looked like a King's musketeer leaning on his foil waiting for Dick Lester to finish filming a gauche Michael York or a villainous Christopher Lee.

He had brought five guitars with him, ranging from a Miami Vice turquoise telecaster to a plain blond toy-like guitar that would have brought a smile to George Formby's face. They were placed upright in a semi-circle behind him; settlers' wagons circled against night-time attack. He chose each one carefully, deliberately, at different times in the evening, making his selection, knowing precisely which instrument he would use for which piece of music, which strings he could coax and bend to convey the exact musical colours and emotions he wanted to convey to an audience that had already been drawn in by his disarming manner and quiet charm.

He knew what he was doing, not just because he had done it all many times before but because he had learned from each occasion, and because he was enthusiastic enough to go on learning and he would always be that sort of guitar virtuoso, the perpetual student, someone with something more to learn, leaving the rest of us, those of us who fancy ourselves as guitar players, trailing, with our knuckles and our jaws dragging along the ground.

It would be wrong to suggest that Gordon Giltrap was just giving a master class in guitar playing because he could do that without breaking sweat. This was no sterile occasion; this wasn't a surgeon operating in his theatre, swathed and gowned to isolate and protect himself from the object of his attentions. This was a terrific musician and entertainer in his chosen theatre of operation making connections with everyone in the audience. He took out the ukulele like toy guitar and talked about acquiring it at a car boot sale, cheap, string-less, he talked of drilling holes, fitting bits here, there. He let his fingers strum across the sound hole and the sound was like a grown up mandolin, one with attitude, or maybe a macho sounding, suntanned Greek Bouzouki. The strings seemed as taut as piano strings and it looked like you'd need fingers wrapped in asbestos to play it.

He talked about how he did mostly his own compositions, not because he didn't admire other guitarists because he did, but because his chosen field was the acoustic guitar, that was where he liked to be; his place. He made us all believe that he'd taken this little piece of flotsam or driftwood and brought it back to life to lead a quiet, deserved retirement in summer fields next to some acoustic forest. Having drawn us all in, he then proceeded to knock us all right back in our seats with a wonderful version of God Save the Queen; not a madrigal soaked, last night of the proms influenced piece of classical kitsch but Brian May's version, all humbucking pick-ups, overdriven, valve amp sounding, distortion filled amphitheatre rock. And all this from a cross between a toy guitar and an Airfix construction kit!

He may play a little too close to the white lines for most Maverick readers, a little too much at the middle of the road rather than picking along the edge of the camber but there is no question that he plays in his own right, in his own style, choosing his own route and finger picking his own path; he owes neither dues nor apologies to anyone. Albert Lee is a great country picker, as good as you will hear, Bert Jansch an innovative and musically important blues / folk stylist, Davy Graham a wayward genius but Gordon Giltrap has a style that merges both finger picking and chord progression, he plays lead and rhythm both at the same time; try thinking John Renbourn crossed with Django Reinhardt. He is the acoustic guitar man.