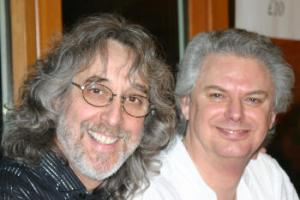 The duo released their first CD "Double Vision" in 2005 which received glowing reviews from the likes of Classical Guitar Magazine.
"Wonderfully crafted work .... a recording to savour" Steve Marsh - Dec 2005

The first weekend of Jan 2007 was a special event for Gordon and Ray, as they were in the 12th century church of St Helen's in Stickford, Lincolnshire for 3 days of filming for a DVD, which will be released later in the year.


All enquiries regarding bookings for Double Vision should be sent to their agent, Sue Holton.
See the Contact pages for details, or visit her website using the link below: